After the grand opening of the museum’s new wing last year, we thought we would throw our hat in the ring for the annual IMAGinE (Inspiring Museums and Galleries in Excellence) Awards (2016). This is an initiative of Museums & Galleries of NSW to promote and strengthen the NSW museum and gallery sector. In the past, M&G NSW have provided us with VIM (Volunteers Initiated Museum) project development grants to fund curatorial work.

We applied for two of the four award categories for volunteer museums: exhibition projects, and individual achievement (for project manager, Peter Kierath). Peter, who is now the museum chairman again, attended the awards night along with yours truly, on 11 November at Verge Gallery at the University of Sydney. The M&G NSW media release outlines the aim of the awards:

achievements of individuals. Recognising innovation and excellence in 500 museums, galleries and Aboriginal cultural centres across NSW, the IMAGinE awards acknowledge the outstanding achievement of over 8,000 paid and volunteer workers in fostering richer local communities and their contribution to the extraordinary diversity within the NSW museum and gallery sector.

“With 68 nominations, this year’s winners represent the best of regional and metropolitan NSW visual arts and cultural heritage experiences. These awards offer a unique opportunity for museums and galleries to advocate, promote their achievements and raise their profile within the community. A large number attended the awards night at Verge Gallery, demonstrating the awards’ continued popularity, and to pay respect to the people who work in museums and galleries across NSW. The Hon. Leslie Williams MP, Minister for Early Childhood Education, Minister for Aboriginal Affairs, and Assistant Minister for Education was on hand to launch proceedings and congratulate all nominees.” 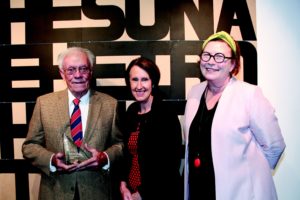 These two awards are wonderful recognition for the hard work put in by the committee and all museum volunteers involved. The trophies are to be displayed in the museum foyer, and M&G NSW is writing a focus story on Peter’s award and the project to promote this year’s awards. It was also nice to see that two photos of our exhibition featured in the awards catalogue. on pages 5 and 21  Click here to view.

M&G NSW have a short article about our project. Click here to view.

Two further exhibition project awards were made: for museums with 3-10 paid staff and those with more than 10 paid staff, won by Fighterworld aviation museum (Williamtown) and the National Maritime Museum (Sydney), respectively.