July 2017 marks the centenary of the first known record of Narromine’s first aeroplane. Here’s an edited extract from the book on Narromine’s aviation history, “Too damned far out west: Narromine’s flying century” (for sale at the museum or by phoning Peter Kierath on 02 68894444).

After the 10th annual Narromine Show of 17-18 July 1917, the Dubbo Liberal newspaper ran an article which mentioned an interesting display in one of the side shows:

Mr J.P. Hayden, a local farmer and inventor, exhibited an aeroplane built by himself, which was very creditable. Mr Hayden exhibited it with the object of raising sufficient funds to purchase a larger engine. He was well patronised and complimented on his handiwork.”

It was presumably the press reports of advancements in aviation, and perhaps more specifically the appearance of aircraft at Dubbo and elsewhere in the region from 1912 onwards, that had fired the imagination of James Patrick Hayden (c1871-1930). Raised as an orphan in Bendigo, Victoria, Hayden had come to the Narromine district around the turn of the century. He and his wife Sarah Anne (née Gallagher, c1872-1938) raised their four sons and one daughter on the share farm at “Lockleigh” near Rawsonville on the road to Dubbo, and then at “Lynne Park” near Wyanga on the road to Tomingley. Hayden was well known in the district, partly through his work for the local Caledonian Society which hosted Scottish Highland gatherings at Narromine, Dubbo and Peak Hill. He was also a justice of the peace, a skilful blacksmith, builder of a number of local mud-houses, and owner of a sawmill at “Fairview” between Wyanga and Narromine. In June 1916 a circular-saw accident cost him the thumb and forefinger of his left hand, and during two months of treatment in Sydney he almost lost sight in one eye through blood poisoning. He evidently recovered sufficiently to embark upon the project for which he is best remembered, as recounted 13 years later in his obituary: 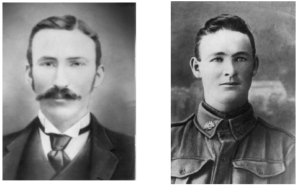 He could turn his hand to any kind of work, and with primitive tools complete a job in a manner that would be a credit to a tradesman. In 1917 the late Mr Hayden made a flying machine, which although it flew for some distance, eventually failed through a faulty engine. Nevertheless, the machine bore testimony to the man’s remarkable ingenuity. (1)

From the only known photograph of the monoplane (shown on next page), it seems the design was influenced by the Blériot XI, an example of which the American daredevil A.B. ‘Wizard’ Stone had flown at Dubbo in 1912 – just a couple of years after the first flights made in Australia. The 1988 chronology of Australian aviation, Flypast, lists the Hayden monoplane as the 60th powered aircraft in Australia (2). Of its construction, James Patrick’s son James Concert Hayden told his son Keith little: only that it had been built from plans, and the construction materials cost the substantial sum or £78. The improvised engine consisted of a pair of twin-cylinder motorcycle motors, joined in a ‘V’ to turn a common crankshaft. It ran so roughly that it eventually broke its half-inch thick mounting bolts. After some brief engine runs a take-off was attempted, reportedly by Jim junior. The aircraft proved to be both nose-heavy and under-powered, and refused to leave the ground.

Among the descendants of James Patrick, opinions differed on the question of who actually built the aircraft. The few local newspaper reports state that it was the elder Jim, a view bolstered by his daughter Eileen Young of Trangie. In 2002 she related in a local newspaper interview that, as a young girl, she had passed nails to him as the aircraft was pieced together. But her brother James Concert no doubt played a part in its construction, and indeed his son Keith believes it was he who built it. Eileen Young did not remember the aircraft being flown, but did recall it being taken to the Narromine and Peak Hill shows as a ground display.

For the first couple of years of the First World War, farm work, a ‘reserved occupation’ which disallowed men from military service, kept the Hayden sons from enlisting in the army. The eldest was finally granted permission to enlist in August 1917, and in June 1918 Jim junior, then aged 21, also went to Dubbo to enlist. In August they were joined by their 18-year old brother Daniel, who was anxious to join his eldest brother in the ‘western march to freedom’ by a group of 40 men who set out from Bogan Gate, west of Parkes, on 26 July. Jim was posted to Albany, Western Australia in November and was awaiting overseas posting when the armistice ended the war, and with it his hopes of joining the flying corps.

While he was away in the army, the story goes, his father decided to try to coax the aeroplane off the ground again. A 1938 Narromine News item stated that a ‘flight’ was made at Wyanga where “Lynne Park” is situated, and that witnesses had travelled there by sulky for the occasion3. Perhaps this was the location Jim senior made the attempt. With the engine removed for modifications the airframe was now better balanced, but would need some other form of ‘horsepower’. Hayden opted for Ned, the strongest horse in the yard, to attempt to tow it into the air (you can read Ross Shepherd’s colourful account of the result in our Bulletin No.2 of 2004, available at the museum). The elder Hayden repaired the resulting damage, and it is to this work which Keith attributes both the newspaper reports and his aunt’s claim that it was he who had built it. 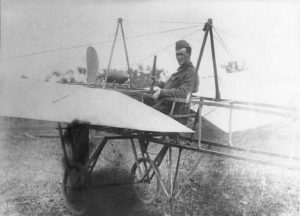 The only known photo of the homebuilt monoplane, with its co-builder Private J.C. Hayden on leave at the farm during his army service in late 1918 (courtesy of Keith Hayden)

Eileen Young recalls that when Sir Ross and Sir Keith Smith landed their ‘Great Air Race’ Vickers Vimy at Narromine in February 1920, they were taken to see the aircraft, and commented to her father that the makeshift engine was not up to the task of propelling it into the air. (4)

Keith Hayden never laid eyes on the monoplane. The only parts of it he saw, years later, were the fuel tank and a flywheel, sump and crankshaft from the engine which remained at “Lynne Park”. He would occasionally turn the engine over to keep it lubricated. As often happens, the historical significance of Narromine’s first aircraft was not realised, and its story has an unfortunate ending. A decade after 6-year old Ross Shepherd saw it stored in the rafters of the shed at “Acton” in 1942, it is thought to have became a casualty of the Macquarie River floods. Any of the aircraft’s remains would have been trampled into the ground by sheep, and eventually rotted away. Nothing other than the photograph and brief local newspaper references is known to have survived.

Aviation stayed in the Hayden blood. Keith went on to join the RAAF as an airframe fitter on Tiger Moths at Narromine during the war, and afterwards on Catalina flying boats. In later life he became a regional technical officer for the Gliding Federation of Australia. And, of course, it was a the next generation of Haydens – Keith, Jean and son Eric – who in 2000-2005 built the Wright Flyer replica now displayed in the museum. Keith was local citizen of the year in 2002 and 2009, and is now among Narromine’s most senior citizens at 94.