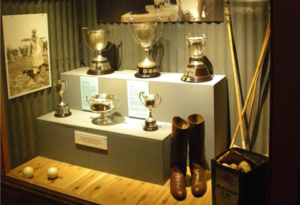 The museum extension might still be just a dream had it not been for the generosity and foresight of the trustees of Narromine Polo Club, who donated $100,000 to the project. We have named the new gallery after the club, and included a display case of club memorabilia.

As outlined in our 2014 newsletter, the polo club had a number of ties with local aviation during its formative years. Its playing field served as Narromine’s first landing ground from 1919 until 1928. In that year, the present aerodrome site was offered by Tom Perry, who was president and later patron of both the polo and aero clubs. Several polo club players were on the aero club committee.