Murray Feddersen, the museum’s inaugural chairman and, more recently, engineering consultant for our extension project, is an old hand at flying aviation dignitaries to and from Narromine in his private aircraft. His famous co- pilots have included Nancy-Bird Walton and astronaut Buzz Aldrin, and on 11 June this year he added two more VIPs from Canberra. Retired Chief of the Defence Force, Air Chief Marshal Sir Angus Houston AK AFC, and retired Chief of Air Force, Air Marshal Geoff Brown AO, were at the museum for the official opening of our new wing. 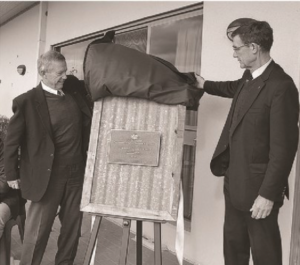 ACM Houston and the Federal Member for Parkes, Mark Coulton MP, did the honours. Thankfully the rain held off, and we even had some sunshine for the outdoor ceremony at the northern side of the museum building. Among the other dignitaries present were NSW Deputy Premier Troy Grant and Narromine’s Mayor and General Manager. It was great to see that most of our major contributors and donors were able to be there. They included the sons or other relatives of several founding members of Narromine Aero Club, including Bruce Hall (son of Vic) and Ewen Simpson (great-nephew of Bowden Fletcher) who in recent years have donated important collections for our displays.

We  described in last year’s newsletter some of the major display elements of the new wing, and mentioned the people who turned the project into reality. They are listed on a new donors board in the museum foyer. Voluntary workers who warrant special mention include project manager Peter Kierath, museum chairman Bob Richardson and committee, and Dave Hyland who donated many hours of his time to the internal and entrance fit-out.

ACM Houston’s opening speech focussed on Narromine Aerodrome’s important wartime role as a training school for young RAAF pilots. He told the stories of two pilots who fought in the war against Germany and Italy: Ron Middleton VC (the first of only two RAAF recipients of the Victoria Cross) who learned to fly here, and Flight Lieutenant Reg ‘Rusty’ Kierath of Narromine who took part in the ‘Great Escape’ from the POW camp Stalag Luft III in 1944. The air chief marshal had read the recent book A true story of the Great Escape by Louise Williams, a guest on the day. The book examines the life of the author’s uncle John Williams, a fellow squadron pilot and best friend of Kierath, and the story of the men’s escape, subsequent recapture, and murder. ACM Houston’s mention of Reg Kierath during the ceremony, looking out over Narromine Aerodrome, was particularly fitting. Anecdotal evidence indicates that as early as 1928, the young Reg and his sister Hope helped to choose the aerodrome site.

A second researcher has been delving into the Stalag Luft III story. Canberra-based aviation author and PhD candidate Kristen Alexander is looking at the lives of the 340 Australian airmen held in the camp. Kristen was familiar with Rusty Kierath’s tragic story, and paid a visit to the museum with her husband David Fax to meet with Rusty’s nephew, Peter. She was also keen to view the memorabilia of a third prisoner of the camp, who coincidentally had flown with Reg’s and John’s squadron, No.450, over North Africa. This was John Osborne, who had learned to fly at Narromine in mid-1941. Some visitors might recall that a display case in the museum is dedicated to Osborne’s collection, including his tunic, medals, logbook and records. Kristen found the records enlightening, and we look forward to reading the fruits of her research in due course. 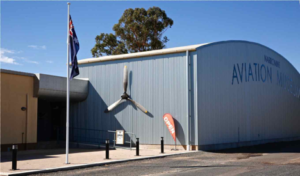 The new wing adjoining the museum. The propeller on the facing wall, a gift from the RAAF, is from one of the Caribou transports which flew flood relief operations from Narromine Aerodrome in 1990 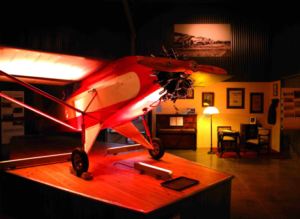 The Corben Super Ace, and behind it the 1930s sitting- room setting where visitors can browse documents